This is partially why I keep returning to Honolulu... seriously.

To end my Oahu’s Triple D segment is a trip to Waiola’s Shave Ice.  No, this is not the Waiola Shave Ice that’s constantly advertised on Hawaii Five-0 and not the one with the bakery.

On my previous trip to Honolulu, a local friend introduced me and my hubby to shaved ice.  At first I wasn’t too interested because I imagined it to be like PNE’s snow cone.  Coarse, grainy, rough ice doused in food colouring.

When I arrived, it was part of a corner store.  But there was a line for the shaved ice which is the first good sign. END_OF_DOCUMENT_TOKEN_TO_BE_REPLACED

I’ve been slacking on the posts recently so I’m hoping to finish up the Triple D segment before the start of the weekend.  We visited the Pier on Sunday and was hoping to have a late lunch at Nico’s.  However, Nico’s was closed and Uncle’s was open.  A local that came to eat with us told us that Uncle’s is where most of the fishermen go eat. 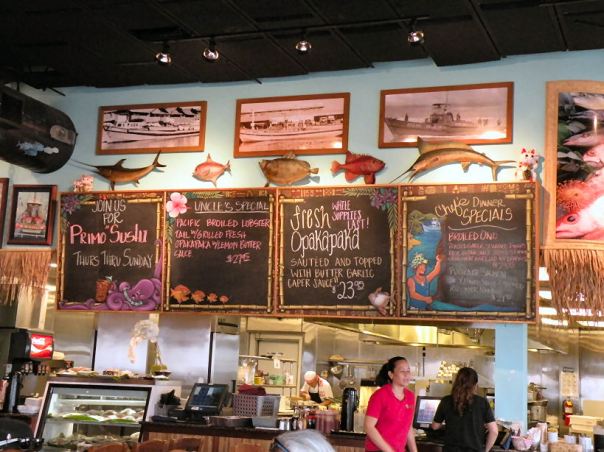 Colourful menu boards with lots of specials to choose from.

That day it wasn’t busy but there were still about 5 tables being served.  Mostly just one or two ppl per table, no other families.  Probably customers that had to work on a Sunday at the docks.

The right page of the menu where it explains the fish and texture was really helpful.

The menu had a good selection of entrees. Many of the items are kid friendly. Big portions as well.

There is also live entertainment on weekends and certain nights.  Their website has a calendar of events.  The only entertainment we had that day was sports on their TVs.  END_OF_DOCUMENT_TOKEN_TO_BE_REPLACED 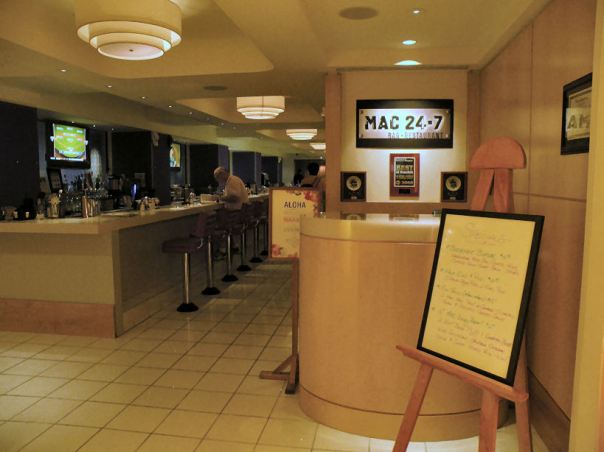 Located inside the Hilton Waikiki Beach Hotel - 2500 Kuhio Avenue. Not quite by the beach but 2 blocks from it.

The restaurant name Mac 24/7 suggests its closing hours which are none unless it snows.  This restaurant is a block from the Aston Banyan located in the Hiltion Waikiki Beach Hotel.  Our friend mentioned that he saw an episode of Man vs. Food where the host did the Pancake challenge at the same restaurant so we decided to give it a try for dinner.  Not the challenge though! END_OF_DOCUMENT_TOKEN_TO_BE_REPLACED

Valerio's Tropical Bake Shop in Honolulu. Parking in front and at the back.

I have returned to Valerio’s Tropical Bakery for one thing, its Pineapple Cream Cheese Bun.  The pineapple cream cheese bun is a very simple bun with flavoured filling. The bun itself is very soft and slightly sweet.   END_OF_DOCUMENT_TOKEN_TO_BE_REPLACED

Once you've tried it, I promise that you will be just as excited as me when you peek into this bag of freshly baked spanish rolls.

Locals will definitely recommend this hole-in-the-wall Filipino bakery Nandings Bakery because of their awesome signature item – SPANISH ROLLS! These buttery soft rolls are small but they are super dangerous to calorie counters.  They just melt in your mouth especially when they are fresh out of the oven.

These photos are taken in the car because THEY DID NOT MAKE IT BACK TO THE HOTEL!!! END_OF_DOCUMENT_TOKEN_TO_BE_REPLACED

After a trip to the farmer’s market, we dedicated a night to make use of our hotel kitchen and make a home cooked meal (and save some $$).   Here’s something that Patch and I whipped up for our friends. 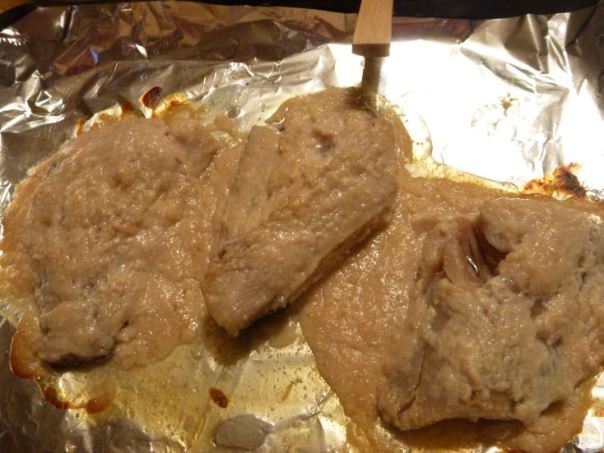 The ever popular Miso Butterfish ($15 from the market). Baked in the oven. The miso paste was thick enough that it overpowered the flavour of the butterfish.

Ribeye steaks from trusty Costco... seasoned with Dole's Original Seasoning. A little bit of salt rub goes a loooooong way. They were cooked at the hotel's BBQ grill.

Fresh abalone sauteed in locally made garlic and herb butter. 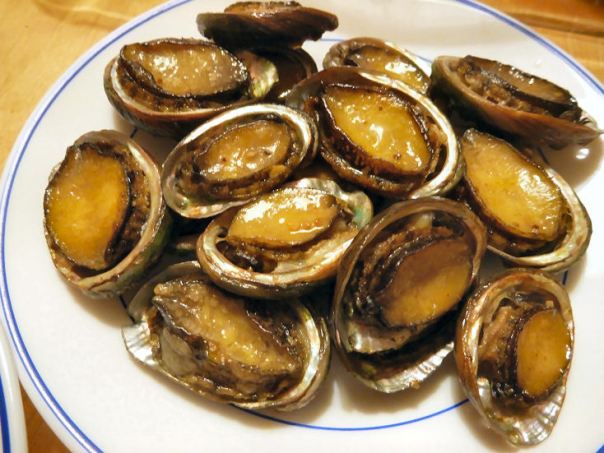 Salad with fresh mango, blueberries and avocadoes mixed with Dole's Pineapple dressing. Corn grilled using the lounge's BBQ. You will need to supply your own aluminum foil unless you got our room, we left the leftovers in the kitchen. 😉

Our homemade meal with beer and bottles of plum wine!

This hotel is one of the many hotels in the Aston chain and also goes by Aston Banyan Waikiki. On Trip Advisor, it is rated as 3 stars.  This is the second time that I’ve stayed at the Banyan.

One thing I learned about Oahu hotels is that is doesn’t matter if it’s 4 stars or 5 stars, the hotels are out dated and old.  Turtle Bay Resort, Royal Hawaiian, Hilton, etc. are 4 stars and above and I can tell you that their standard rooms are similar to 3 stars hotels along the strip.  Only exception is the Halekulani… hope to one day be able to stay there but I was lucky (and gutsy) enough to sneak in and catch a glimpse of the hotel.

There are many reasons to why I returned to the Banyan.  They are:

Booking for both trips had its own hiccups.  But it wasn’t anything that couldn’t be resolved.  Both times, I asked for King size beds and was given Queen size which I swear it’s a bit smaller by Canadian standards (closer to full/double).  Both times, we had to switch rooms to get the bed that we wanted.  The staff are friendly but they work on Hawaiian time and very chilled. END_OF_DOCUMENT_TOKEN_TO_BE_REPLACED

Oahu’s Triple D – Bubbies – Would you like an Aural Massage with your Mochi?

Bubbies from the University district.

This is purely review on Bubbies’ ice cream mochis.  But if the rest of the menu is as delicious as their mochis, then go for the whole menu!

A mochi is a type of japanese pastry that has a light thin skin that is made from glutinous rice, or flour of sweet rice wrapped around a filling or moulded into a shape.  In this case, mochis are a common dessert where the skin is wrapped around ice cream.  It is quite common in Asia and there are many different variations and types of mochis.  END_OF_DOCUMENT_TOKEN_TO_BE_REPLACED 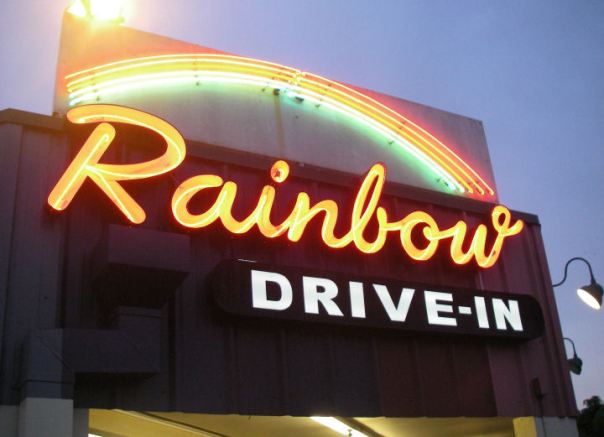 As seen on Guy Fieri’s Triple D!!! Also, I think this is where the whole scoops of rice and macaroni salad with everything concept originated… 😉

To be honest, I’m not a fan of diner food.  Especially where there are no indoor seating… but then again, it’s Hawaii, it’s not like I’d feel cold or something.   I guess it reminds me of those teenage summer nights at the PNE eating diner-like food prepared by a greasy face teen who could care less about proper handling of your food.

When Patch told me he wanted to come to Rainbow on our last visit, the food snob side of me shook my head and poor hubby waited for this trip to get our friends to back him up to come…  END_OF_DOCUMENT_TOKEN_TO_BE_REPLACED

Anyone who read any Hawaiian foodie blogs, forums or talked to locals would have heard of malasadas, especially from Leonard’s Bakery.  Malasadas originated from Portugal and it’s a fried pastry with custard filling dusted with granulated sugar on top.    When you bite into the pastry part, the texture is like a type of flat chinese doughnut – Ox tongue pastry (ngau lay so) mixed with TimBits.

The place and ONLY place we heard anyone recommend getting malasadas from is Leonard’s Bakery.  On our previous visits, Patch and I were able to polish off  at least half a dozen in a sitting.  However, now we can barely finish 2 each in a sitting.  Must be old age… END_OF_DOCUMENT_TOKEN_TO_BE_REPLACED